Not Yet Dead Nearly - WW1 Exhibition at Salthouse Church, Norfolk.. 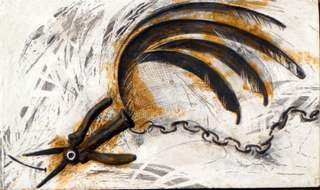 23/03/2014
This exhibition spoke of fragmentation, loss, and the patient hope of redemption, as the unquiet voices of a lost generation murmur still. Curated by Ruth Calland, the three artists and friends collaborated and developed work especially for this show.

On the centenary of the start of World War One, three artists offered their contemplations on its legacy. The title of the exhibition "Not Yet Dead Nearly" derives from the acronym NYDN, the official diagnosis of shell shock, Not Yet Diagnosed Nervous, which attempted to disguise the psychological nature of the condition at a time when there was little acceptance that trauma could be other than physical.
The change of wording for NYDN in our title was introduced by the men themselves, and their black humour demonstrates both resilience and disillusionment with the war.

The exhibition included a poetry workshop with Phil Barrett: Tell Me the Truth about War, followed by War Poetry Readings:
a talk by Ruth Calland (Jungian Psychotherapist): Shell-shock and Psychiatry in World War One;
a sculpture residency by Jonathan Waller inside the church during the exhibition;
and prior to the exhibition, Jessica worked with 13 x Yr 9 students from Stalham High School, exploring her techniques of plaster casting and drawing, on the theme of 'Warbirds'.

The three artists (and long-term friends) are of the generation who grew up in the cold war era, with an acute sense of the legacy of WW1 and WW2. Their grandparents played an active role in these wars. Ruth Calland’s grandfather was saved from almost certain death in WW2 when the Japanese surrendered; just as his radar ship was poised to invade a Japanese harbour. Jessica Perry’s family treasure the diary of her grandfather Syd, who carefully documented his life as a water bearer in WW1. And Jonathan Waller would never have been born if his parents had not met at a de-mob station at the end of WW2.

The artists took on one of each of our armed forces as a starting point and focus. Jonathan Waller’s wax and driftwood sculptures - half man and half shipwreck – speak eloquently of human frailty, mortality and survival. His elder brother, both parents, and grandfather all served in the Navy, the latter as a ship’s surgeon in the Middle East in WW1.
Jessica Perry’s grandfather travelled to and from the front line with a horse drawn cart, inspiring her to create intersections of machinery and natural forms, creating a series of 'Warbirds'. Using scrap iron, chains and old tools with wit and invention, casting a collage of shapes into stained plaster, she conveyed the unnatural and disturbing transformation of the landscape.
Ruth Calland explores the psychological impact of violent trauma on the mind. Heads and other body parts suspended in clouds speak of a haunted no man’s land of the soul, and reveal the frozen and paralysed states that result from experiences that cannot be processed.

This powerful and evocative exhibition travelled to King's Lynn Arts Centre for a three week show, and featured a new projected drawing by Ruth Calland.
Next
Previous